Wikipedia says, "A Fibula (Latin "to fasten"[1]) is an ancient brooch. Technically, the Latin term fibulae refers specifically to Roman brooches, however, the term is widely used to refer to brooches from the entire ancient and early medieval world. Unlike modern brooches, fibulae were not only decorative, they originally served a practical function: to fasten clothes, including cloaks. Fibulae replaced straight pins that were used to fasten clothing in the Neolithic period and Bronze Age. In turn, fibulae were replaced as clothing fasteners in the Middle Ages by buttons. Their descendant, the modern safety-pin, remains in use today. 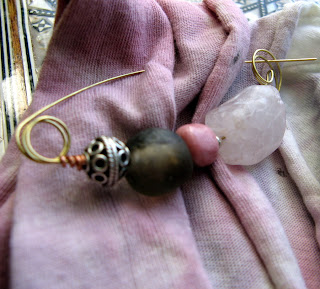 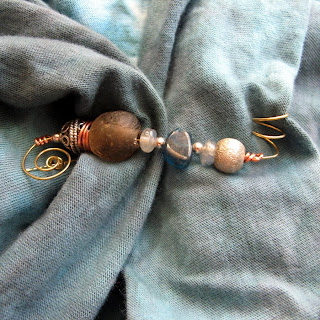 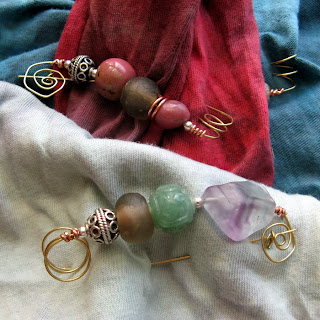 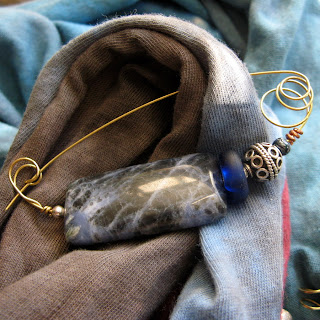 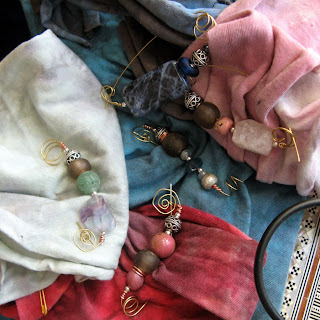 time flies whether you're having fun . . . or not

It's been another long while since I've updated.

That's kind of rude isn't it? You get all involved in someone's life and then one day they're just not there . . . and it's human to worry and wonder what happened to them.

After about a year of almost daily blogging, I decided to only blog if I had something to say. And here's the result. An inactive blog. When I was blogging daily I found something to say, but it took so much energy . . . a commodity I frequently run short of.

So yet another apology, a thank you to all those of you who've been thinking about me, a double thank you to each of you who have actually written and asked about me. Those are precious thoughts and actions. And an update!

We're DIY'ers and we just refloored and repainted hald of our home . . . it looks like we're just going to trip on stacks of flooring for a while, before we get around to the other half.

My bedroom is in the done half, and I'll have to take some pictures at some point. It's very me, which is to say, I think it's wonderful-- though certainly not everyone would.

My studio corner is in the undone half . . . more on that later.

My shrink upped my Prozac dose and suggested a vitamin regimen and a beady buddy over at MannyBeads (who daylights as a shrink) made arrangements for me to get my hands on a sunbox for light therapy.

These things seem to give me more energy than I've had for a couple of years.

An artist friend of mine from California has moved out to Georgia for awhile and we've had a lovely time getting to know each other better-- that includes going to art supply and bead stores, on nature walks where she brings her camera and shoots mushrooms and I keep an eye out for bones, feathers and dead bugs, and planning a trip to the High Museum of Art in Atlanta and the Fernbank Museum of Natural History while I hold still enough for her to sketch. Well-- I have to have something to do with all of that wonderful energy and I'm very much looking forward to getting to know Da Vinci and Van Gogh a bit better!

On my mind has been fibula design. Diana of DyeDianaDye asked me about pins for a new line of Kestrel Vests and I've been fiddling with those. On aforementioned bead store run I laid my eyes and hands on some fabulous African recycled glass beads that will make an appearence in these pins!

On the 12th I'm headed to Hawaii for the first time. There will be pictures!

All in all my quiet time has been a scene of melancholic lethargy punctuated with bright sparks of joy more intense than I've had since this particular episode started. I moved my g-mail status from Level Red to Aftermath and I'm grateful to be on an upswing.
4 comments: Links to this post

Get Sketchbook by E-mail!

SarahKelley
I believe that uniformity and conformity are overrated, that less is less, in the value of the unique, individual, ornamental and simple, and in the humanity of art. I'm a self-taught southern gal with a needle, a pair of pliers and an intense love for art, beads and jewelry. I love to work with different materials, learn new techniques, and give free reign to my imagination.

Promote Your Page Too